The Montana Veteran's home was authorized by the fourth Montana Legislative Assembly in 1895, only six years after the state joined the Union. The home in Columbia falls was built in 1896.   The first building was dedicated May 30, 1896. The first resident was admitted 21 Jun 1897.  The initial purpose of the home was to serve veterans of the Civil and Indian wars. The residents who lived there during a large part of the 20th century farmed the property and were, in the main part, self reliant. 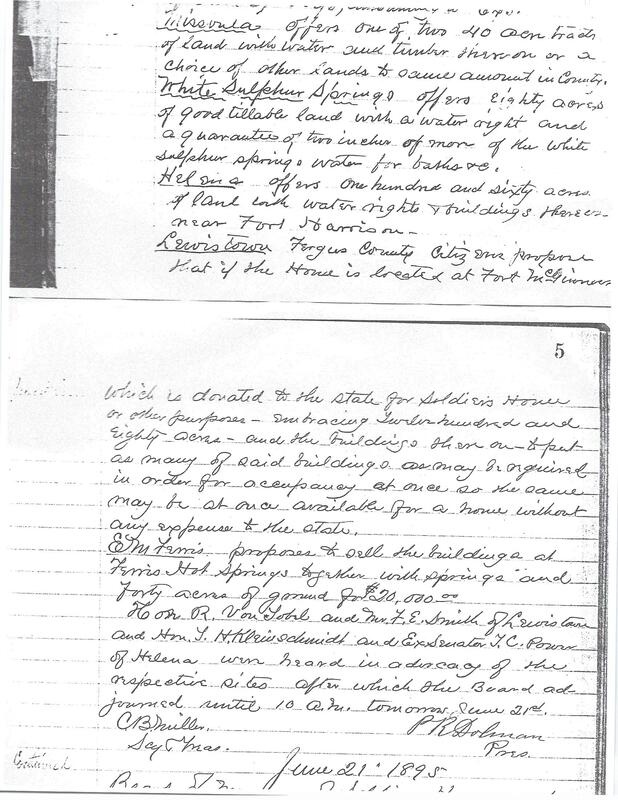 Water rights for irrigation. No less than 40 acres of tillable land. And located at least one mile away from a saloon or any drinking establishment. Such were the requirements for building the Montana Soldiers’ Home in 1895.
Also known as The Montana Soldiers’ Home District, the place isn’t just a particular building, but a complex along Veterans Drive in Columbia Falls with several historic buildings and a cemetery.
The founding of the place owes much to The Grand Army Republic and Montana Governor J.B. Rickards. Together they “persuaded” the state Legislature to enact the home at a time when some 2,500 Civil War veterans lived in Montana.
The land was donated by the Northern International Improvement Company (a subsidiary of the Great Northern Railway; hence the railroad tracks near the entrance). George Rath, an early Flathead Valley pioneer, had previously farmed the land, and knew well of its practicality and beauty.
While the grounds were as idyllic as a Romantic poem, life for the earliest veterans at the home may seem stark in comparison. Early residents (or “inmates” as they were called) had to prove they were poor enough — that they could not afford to live anyplace else. Nonetheless, they had to forfeit two-thirds of their military pension or other income to the home. And former soldiers also had to earn their keep and work, while resisting any temptation to drink beer or any other bedeviling spirits.
And while the lives of early residents and buildings tell important stories of local history and architecture, the 800 internments in the cemetery offer much for conversations about history as well. The cemetery holds graves of those who served in the Civil War, The Spanish American War, WWI, WWII, Vietnam, Korea — almost every conflict you could mention.
For example, Frederick C. Hunt (1848-1918), who received the Congressional Medal of Honor during the Great Sioux War of 1876, is buried here.
Franc Collar, who died in France during WWI, was brought home and laid to rest here by his mother and father.
And in a similar honor, the WWI “Doughboy” statute, which stood along Main Street in Kalispell during the 1930s, now flanks the road amid a patriotic air that whirs about the place.
Women are buried here as well. While many are widows of former soldiers, servicewomen such as Martha (née Cavanah) Bennett who served in the Navy during the Korean War are buried here.
And while these graves speak of lives and experiences far and wide, the Old Soldiers’ Home has many tales and trajectories of local history as well (although some are more peculiar than patriotic).
For example, William H. Gregg, “the Father of Demersville” lived here and is buried in the cemetery. “Uncle Billy” Gregg was a Civil War veteran and served as a lieutenant in the Indiana Infantry.
Gregg died here in January 1914 of peculiar circumstance. One night, he took his rifle and shot a deer from his window in the Old Main Building. As a groundsman prepared to take the deer away, Gregg jumped from the window to stop him. Gregg broke several bones in the fall, and consequently died hours later. He imagined the rifle, the deer, and the groundsman in a dream — but actually jumped from the window as if it were all real.
So if you’re curious about a place both peculiar and patriotic, a place in honor of those who’ve served and sacrificed, and a place with important American (military) history, look no further than the Montana Soldiers’ Home.
Jaix Chaix is a columnist and author of Flathead Valley Landmarks and other local history books that are available for sale at the Flathead Beacon at 17 Main St. in Kalispell. Used by permission Flathead Beacon 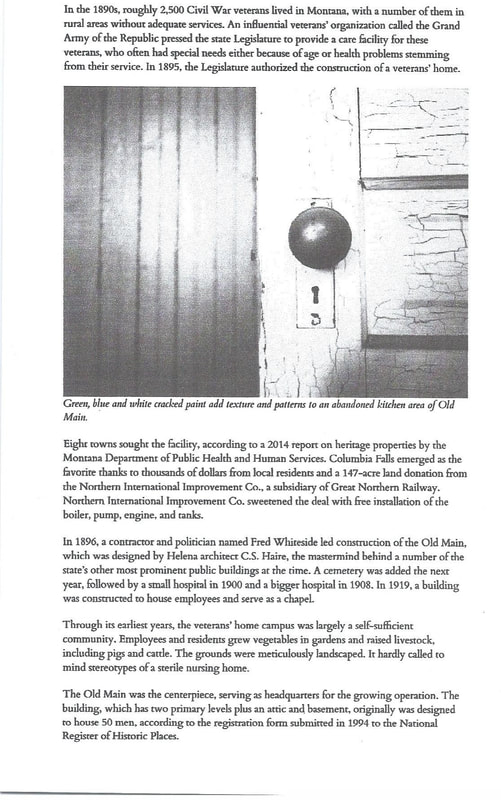 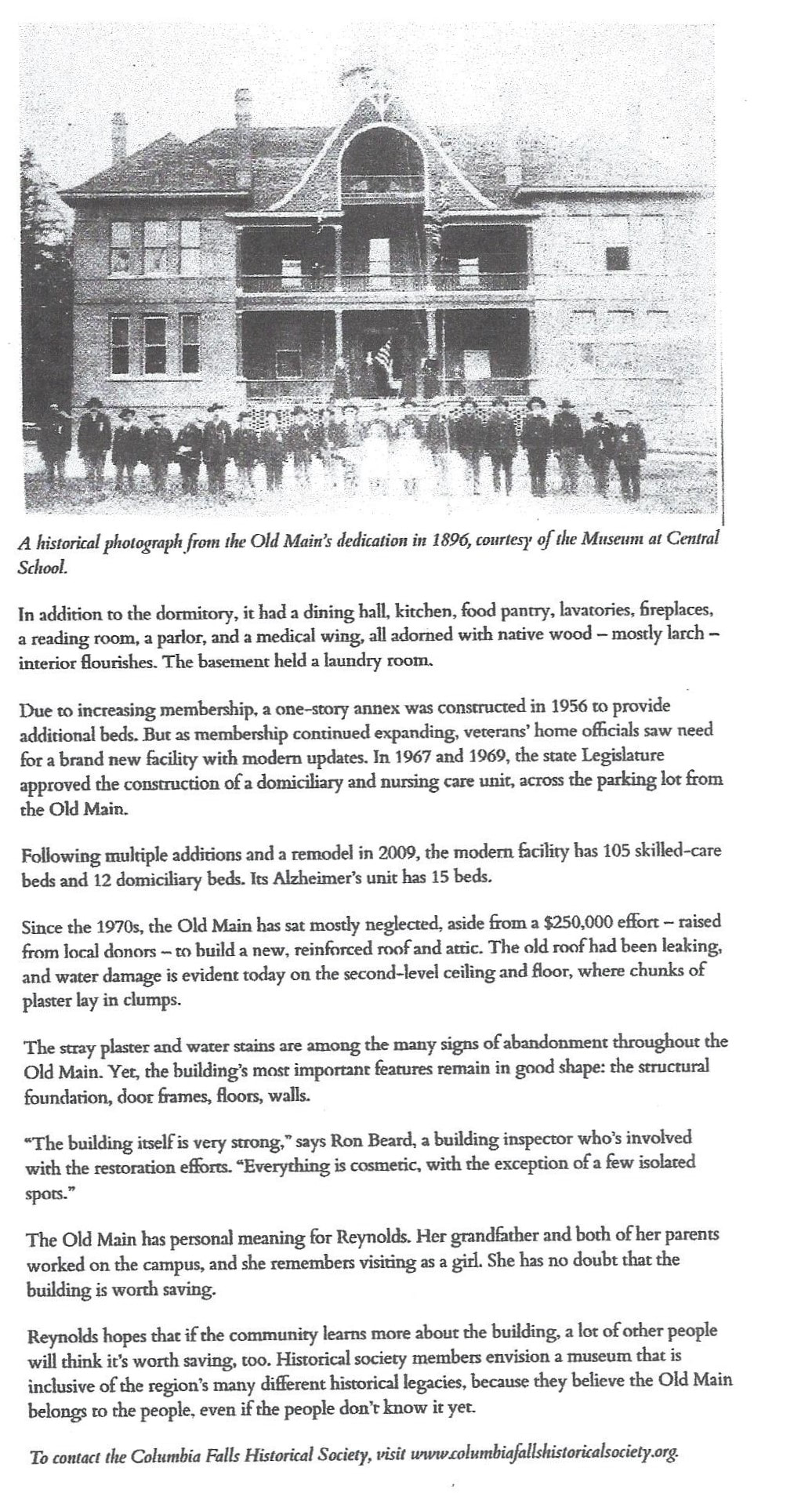 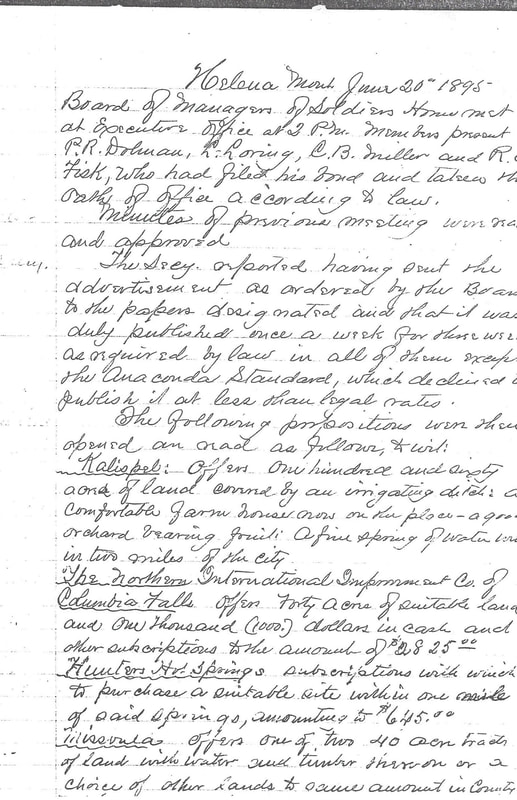 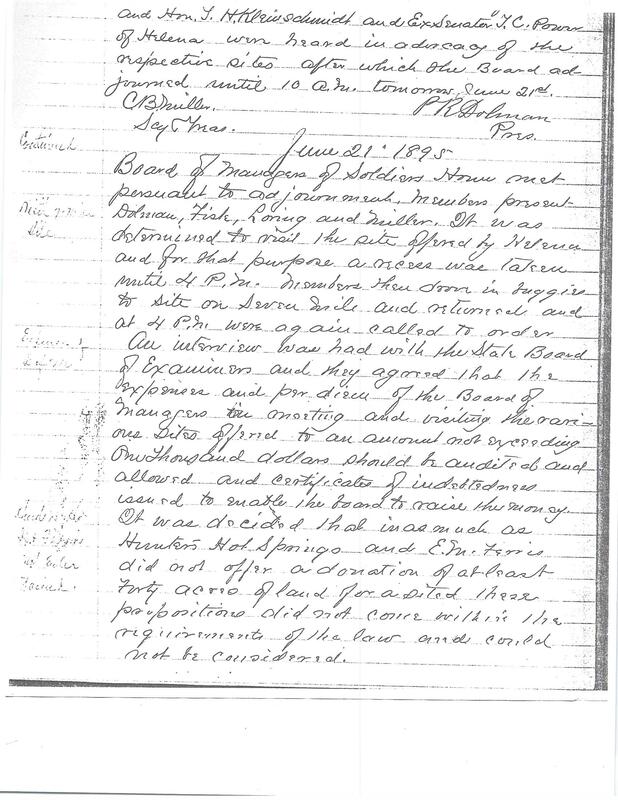