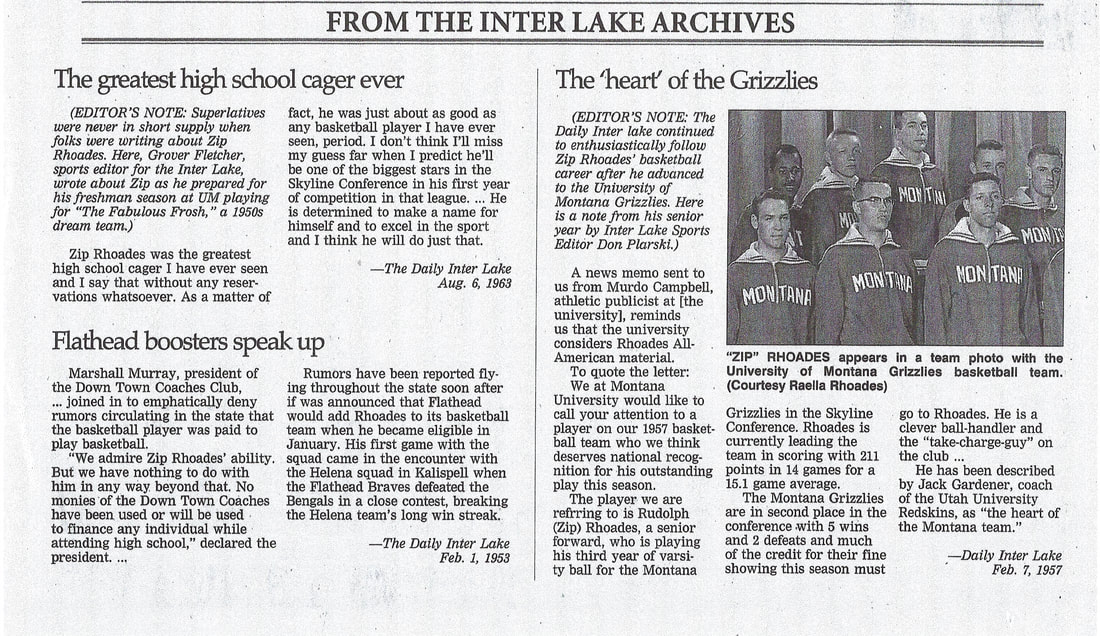 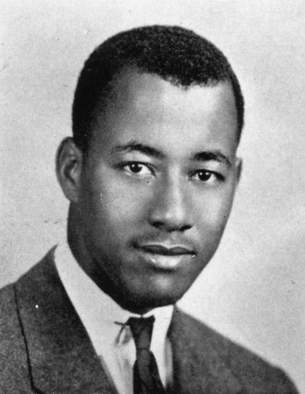 Zip Rhoades was a big man who made a big — and lasting — impression on those who knew him.
Just ask his friends and teammates from the Class of 1953 at Flathead High School. As one of the few black students in Kalispell — as well as Montana — Rhoades would have stood out in a crowd anyway, but Rhoades stood out for all the right reasons — he was charming, smart and incredibly athletic — and yes, he was 6-foot-3, too.
As his widow, Raella said in a phone interview from her home in Baltimore, “He was wonderful. It just seemed like people were drawn to him because of his personality.”
Zip, who died last August at the age of 81 as the result of complications from a car accident, only attended Flathead for one year, but he was not just a star basketball player; he was also elected senior class president a few months after moving to Montana from his native Baltimore.
“That’s just the way he was,” Raella said. “Everybody just loved him.”
Jerry Siderius, who grew up in the Lower Valley, was one of the people who met Zip that year and never forgot him. They played together as seniors on the Braves basketball team the following spring.
“He came at the beginning of summer, and I didn’t really meet him until school started, but the hype was that he was a really great basketball player. He lived up to all the hype and more.”
Rand Robbin, a freshman at Flathead High in 1952, said, “Literally, Zip could have been a Harlem Globetrotter his senior year. He was so fast and played in such unexpected maneuvers, some on the team found themselves too laggard. His performances were so exciting the gymnasium seats filled to capacity with each game, and citizens with no prior interest in the game attended. People like my own parents.”
Robbin said that Siderius, who played the center position, “proved to be a perfect match, the one able to anticipate where Zip would pass the ball, and how, and to where.”
Tom Little, whose father, Frank, was Flathead’s award-winning coach in those days, remembers meeting Zip the summer before school started in 1952. Tom had graduated in 1951 after participating in the first of two consecutive state-championship basketball seasons, but he was home for summer after his first year at Oregon State University.
“Zip was playing ball at Linderman School, where they had outdoor courts, and he was playing with Dick Wilson, who had just graduated and was on our two championship teams. Rhoades was just playing all around him and over him and playing a hell of a game,” said Little.
Rhoades was staying with the Thompson family in Kalispell, and it was Willard Thompson who was the matchmaker between Zip and Flathead High School. First, he had “discovered” Zip playing ball in Baltimore, then invited him to visit Montana, and later suggested to Tom that his dad, Coach Little, might want to take a look.
He did, and the rest was history. Tom said his dad later told him that Zip was the best player he ever coached.


Raella Kelley was 15 when she met Rudolph “Zip” Rhoades in 1952. He was 17 and had just moved to Kalispell from Baltimore. Raella was living in Butte at the time, but she was a Kalispell native and spent summers here with her extended family. Her grandmother and grandfather were Clemmie and John Thompson, well-known members of the black community in Kalispell; her uncle Charles Thompson and cousin Sylvester Douglas Thompson were living here; and her mother, Laura Jane (Thompson) Kelley, made sure she visited often.
Raella has very good memories of the black community in Kalispell, and remembers her rural upbringing fondly.
“We did a lot of fishing and hunting in those days. I tell my grandchildren about our life out there, and putting on waders and digging up worms to catch fish. It was a great place to grow up.”
That yearning for a quality life is also what had drawn Zip to Kalispell. Raella recalls how her uncle Willard Thompson had met Zip while enrolled at college in Baltimore and encouraged the young man to come out to Kalispell.
A story in the Daily Inter Lake the following February told some more of the story. The front-page article by reporter Jean Caton was written in response to rumors that Zip was not eligible to be a high school athlete in Montana, or that he was paid to play. It included documents provided by Flathead County High School Principal Kenneth Rawson that not only proved Rhoades was eligible, but filled in some of the details of how he came to Kalispell.
As explained by Caton, “Zip Rhoades arrived in Kalispell last spring, and was later joined by his mother, Mrs. Rudolph Rhoades. Mrs. Rhoades, in discussing the reason why they came West to complete the boy’s schooling, stated last summer to high school officials, ‘Our color doesn’t have the chance in the East that it does in the West. We want to give Zip every opportunity that we can.’”
Unfortunately, Zip’s father, Rudolph Rhoades Sr., a chef in Baltimore, was unable to leave his job to move to Montana, and when Mrs. Rhoades returned to Baltimore, Zip was left ineligible to play football for the Braves. Instead he had to wait one semester and gained eligibility for the basketball season.
It should be noted, however, that in the fall, “Rhoades practiced each day with the Flathead football squad, despite the fact that he was not eligible to play in team competition.
“That,” said Principal Rawson, “is because he loves sports.”
Zip also played baseball with the American Legion Juniors the summer before his senior year, playing first base and pitching. When school started, Rhoades also worked part time before school at Howard’s Shoe Shine Shop, operated by another prominent member of the black community, Howard Gibbs.
“Once basketball season came, Zip practiced with us all the time,” remembered Siderius. “He didn’t put airs on at all. He knew he was good, but he let his actions show who he was. He was a great team player.”
A story in the Inter Lake written a few years later when he was playing basketball for the Army described him this way:
“Rhoades was not a big scorer… He was averaging a little over 10 points a game, but every point he scored he must have assisted his teammates in scoring five.”
At the state basketball tournament his senior year, however, Zip rose to the occasion. He broke the state tourney scoring record with 104 points in four games, Siderius recalled.
“He was the outstanding player for the tournament,” Siderius noted, although Helena won the championship.
“We had real good support from the community. Kalispell did not have much of a black population at all. Zip was a senior. Doug Thompson was a junior and played on the team. Both Doug and Zip were well thought of, and I don’t think there were any problems along racial lines.”


Siderius remembered that the basketball players in those years were kind of local celebrities.
“The new gym was opened in my sophomore season. We had standing-room-only crowds. It was the only entertainment back then. If you didn’t get there an hour before the game, you didn’t get a seat.”
Tom Little recalled the intense rivalry with the Helena team, which featured another young black man named Ray Howard, who was 6-foot-8, but all the local attention was on Zip Rhoades.
“When Helena came to Kalispell, the gymnasium was packed,” said Little. “The fire marshals were trying to keep people out. They were hanging from the rafters to watch this kid [Zip] for his coming-out party … and they defeated Helena and gave them their only loss for the year.”
A victory was cause for celebration for the Braves for more than one reason, Siderius said.
“If we won a game, we got a free hamburger and milkshake at Norm’s News, and a free shoeshine from Howard Gibbs. It was just part of the support we got from the community.”
After leaving Kalispell, Rhoades went on to a stellar career at the University of Montana in Missoula. In a program written for the university, Rhoades was called “a real crowd-pleaser and a master at faking and clever ball-handling … probably the best in University history.” He was honorable mention for All-America honors in his junior year and was named to the All-Skyline conference team his senior year.
After college, Rhoades played semi-pro ball in Seattle with the Buchan’s Bakers in the National Industrial Basketball League. Not too long after, he was drafted and joined the Fort Chaffee All-Stars in Arkansas, playing on the All-Army basketball team two years in a row. He made the All-Army team again a few years later when he was re-activated following the Berlin Wall crisis.
In the meantime, in 1959, he and Raella got married and settled in Baltimore, where they remained for their 56 years of marriage.
Zip went on to try his hand at insurance, and later had a long career with the child-support services division of Baltimore County. He and Raella raised a family and enjoyed a good life together, but he never did forget that year at Flathead County High School and it could be said that Kalispell made just as much an impression on him as he did on the town.
“He really loved the experience that he had in Kalispell,” said Raella. “He really enjoyed himself.”
Frank Miele is managing editor of the Daily Inter Lake. He can be reached at 758-4447 or by email at edit@dailyinterlake.com. 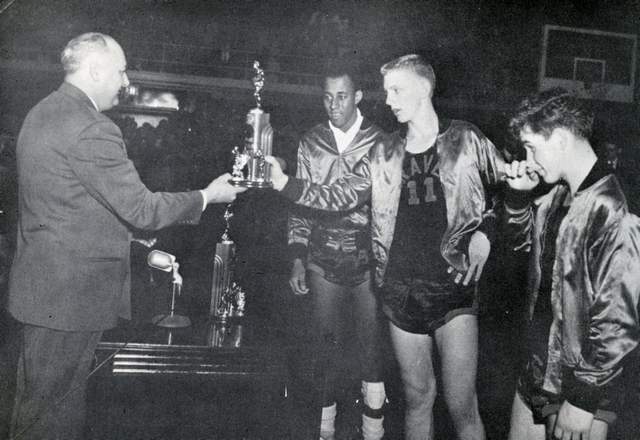